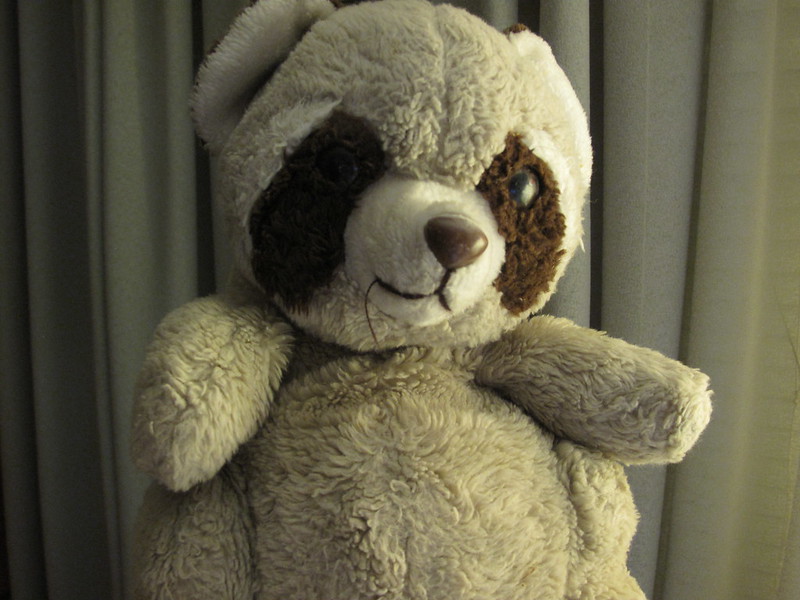 There was a moment this afternoon when I completely forgot what day it was. But, you know, in a good way. Three-day work weeks can be like that.

It helps that, while I still have lots of work to do, the mad, am-I-ever-going-to-finish-these projects have been finished, or near enough to let me breathe a little easier. Lots to do, and more projects coming my way, but I’m hoping for a quieter calmer summer — spring? what’s that? — than my winter.

Meanwhile, with the warmer weather apparently also come raccoons. I’d heard what the internet seemed to confirm were raccoons the other night when I was out with the dog, and then last night before I went to bed I heard it again. It’s not a cute or comforting sound. I opened my bedroom window and observed two of them in a driveway across the street, and then climbing a tree next to that driveway. One of neighbors came home then, and I could hear her talking on her cell phone, saying she didn’t know what that weird noise was. Another neighbor crossed the street to say it was raccoons (or may possums), which was good, because I was beginning to feel like I was watching the start to a horror movie from my window. It saved me from having to shout, “For god’s sake run!” After looking around the tree for a while, they both went inside, and I went to bed.

Except for the raccoons (most likely not possums) themselves, we haven’t seen any evidence of them, or least I haven’t. We haven’t seen them in the daytime, which is good, and while they do make a horrible angry chittering noise, there’s less concern over rabies. Not no concern — and the neighbors across the street have (relatively) small and (fairly) aggressive dogs, so I don’t think anybody necessarily wants raccoons taking up residence.

They are less cute and cuddly than the stuffed animals of my youth led me to believe.

The past week really just flew past, and it’s with no small amount of shock that I realize I left for Canada some ten whole days ago. It was a really good trip, productive in odd ways for my writing and a whole lot of fun. But I’d be lying if I said it didn’t feel a little weird to feel like I’m suddenly back.

As noted here, I arrived a week ago Thursday, after a busy (and early) morning of traveling. I wound up seeing very little of downtown Calgary, just a short walk around the hotel and then back to my room, but I have it on reasonably good authority that the city’s a whole lot nicer and more interesting before dark. (After is presumably when the bloodthirsty, fanged deer come out, at least those who have migrated from the mountains, but perhaps I’m getting ahead of myself there.) On Friday morning, I met Heather for breakfast downstairs at the Palliser, where we were joined by Jocelyn, had a very nice meal, and I suppose they sussed out this odd man who had traveled some 2,400 miles (or 3,800 km — roughly; miles seem a whole lot easier to guestimate in, but when in Rome…) to meet them and travel on to Banff.

It’s not quite a two-hour drive from Calgary to Banff, but the time passed quickly. The bus was comfortable, and Heather was a very good tour guide and company along the way. We arrived and checked in at the Banff Centre, then split up, me to explore and get my ID card made and Heather to pick up supplies for her swanky studio. We met up for dinner, where we both met a poet and a filmmaker, who were staying and working at the Centre during the same time. I’m not terrific at meeting new people under normal circumstances, but the Centre really does allow you to bump into new people — artists and mathematicians both — doing interesting work, and I’m glad to have met the few I did. Friday evening, after hearing about it at dinner, I decided to go to a short film retrospective, and after that, it was straight back to my room to work on the 3-Day Novel starting at midnight.

Well, I actually went to sleep and started around 6 o’clock the next morning. I mean, I’m crazy, but I’m not that crazy.

The next few days are kind of a blur, as I spent a lot of the time sequestered in my room madly typing away at my novel. Sometime Saturday evening, Heather took pity on me and accompanied me downtown, where I’d not yet been. It wasn’t the full Banff tour — and walking downtown in Banff always comes with the caveat that you’ll have to walk back up — but it was nice to get out of my room and my own head for a little while at least. And, really, Banff is a ridiculously pretty town whose weather was ridiculously nice while I was there.

And we only saw one bloodthirsty fanged deer along the path, so there’s that.

I finished the three-day novel sometime on Monday evening, Labor Day, around eight o’clock. I eventually called it The Last Man from Mars. It’s a bit more time-travely than I originally expected, and it’s by no means a masterpiece — maybe salvageable, almost certainly not publishable — but I definitely had a sense of accomplishment when I was done. The final draft, which I have yet to read over — and who knows if I ever will? — clocked in just under 17,000 words. That’s on the short side for a novel, but it’s 17,000 words I didn’t have on Friday…and not all of them are bad.

There are worse things than writing a failed novel. Like not writing one at all. The rest of my days there were a mix of writing and seeing the sights. On Tuesday, we went up to Sulphur Mountain in the Banff Gondola. It’s a touristy thing to do, apparently, but hey, look at me: tourist. The view from the top was simply spectacular, even if I did get a little sunburned along the way.

A number of people hiked it — including, apparently, some of the aforementioned mathematicians — but even with the pretty reasonable switchback trails, I think the gondola’s the nicer way to see the mountain and below. I spent a lot of the rest of my time plugging away at a short story. I didn’t quite take the words-and-more-words-at-any-cost approach of the three-day novel, and the going was a lot slower, with the story still nowhere near finished. But I think I made significant progress on a story that’s been stuck for awhile. The Centre definitely creates an atmosphere conducive to creativity.

After the gondola, Heather and I went to reserve a spot on a horseback trail ride for later in the week. I’ll admit I was more than a little nervous about the whole thing, having never been on a horse before — I seem to recall a brief photo op atop a pony when I was a young boy, but I don’t remember it ending well. But Heather made it sound like it might actually be fun, and how often do you get the opportunity to ride a horse along a trail in the Rockies?

I probably needn’t have worried. It really was a lot of fun. I was very sore the next day — I don’t think hiking back downtown for last-minute souvenir shopping afterward really helped — but it’s definitely something I’d welcome the opportunity to do again. Aside from a slight nervousness at mounting and dismounting, and some trepidation as Francis, my horse, picked his way down hills, the ride was absolutely worth it, and it definitely did not feel like two whole hours. I’m only sorry I didn’t take more pictures along the way. Then on Friday I checked out. I hung around the Centre a little while longer, sitting out on the deck at Heather’s studio, reading her most recent short story (it’s quite good). Then around three o’clock, I got a bus back to Calgary, then found my way to the Hilton Garden Inn near the airport. (A really nice place, and everyone there was very friendly, but man, after a week of the Banff Centre’s terrific and ample food, their room service almost couldn’t help but be a let-down.) I turned in early, not doing much more than watching some Canadian television. (Wow, they have Red Green up there, too!)

I had an early-morning flight the next day, although thankfully not quite as early as the week before. I seem to have bumped into a lot of tour groups on my travels, first the large group in line ahead of me at JFK, then twice on the way back, Japanese tourists leaving Calgary and a tour group of Minnesotans headed for twelve days in Rome. I arrived around five o’clock in the evening, New York time, my father picking me up at the airport. I had a really great time on my trip to Canada. I wrote a short and crazy novel, saw some beautiful scenery, plugged away at a short story, met some really interesting people, ate some really good food, went up a mountain, rode a horse for the first time (and enjoyed it, no less), and got the chance to meet Heather. Not at all a shabby vacation. I never quite got used to the money — some of it’s blue! some is magnetic! lots of things are slightly more expensive — or the use of metric for everything but weight in pounds. (Seriously, what’s up with that?) I never quite mastered the mental conversion of Fahrenheit to Celsius, and I never stopped being amused by everything being written in both English and French. But it was absolutely worth going.

And while I’m not so sure yet about next year’s three-day novel contest, I’d definitely go back to Banff some day.

So apparently there was an earthquake today?

Everyone here is fine. It was reportedly a 5.8-magnitude earthquake, which, as many West Coast people were quick to point out over Twitter and elsewhere, is pretty much nothing, especially when you’re several miles and states over from the fault line. We definitely felt it in my office, up on the eighth floor, a weird vibration that caused a bunch of us to look up and say things like, “Did…did you feel something?”

Yeah, it was weirdly disconcerting, especially since I don’t think I’ve ever experienced an earthquake before, but it wasn’t exactly frightening. We’ve had freight trains go past our block — we’re right by the tracks, here at home — that have shaken me more. I wasn’t able to reach my sister, who works around the Washington, D.C., area (and therefore closer to the epicenter than New York), but only because the cell phone coverage went down. She wasn’t in any danger either. I have one co-worker who was outside, eating his lunch, who missed the quake altogether.

Other than that non-event of a quake — which nevertheless dominated conversation in the office most of the remaining afternoon — it was a pretty standard Tuesday. A conference call about a book in development was about as exciting as it otherwise got.