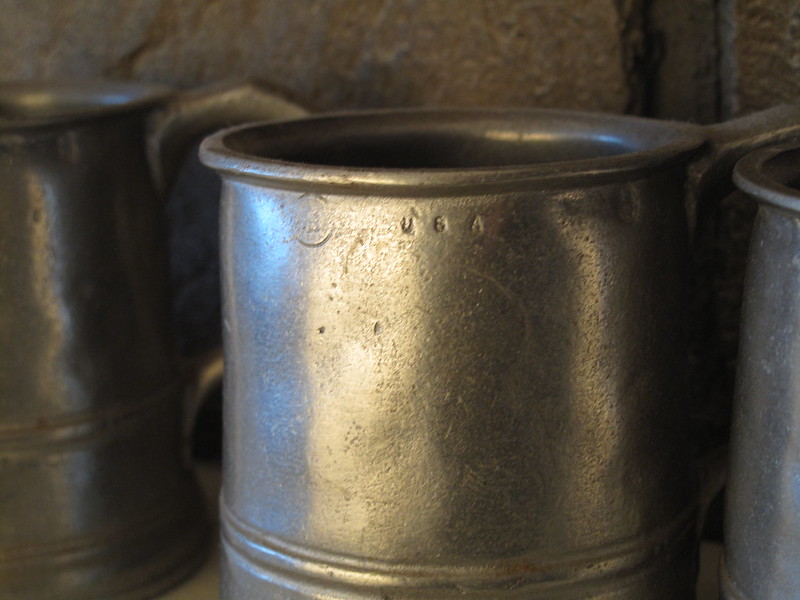 Third time really is the charm.

After unexpected snowfall in January, then unexpected illness last week, I finally went to see a Broadway musical last night.

My father still isn’t always feeling well, so he unfortunately opted to head home before the show, walking over with us to the theater but then taking the subway and train back. It’s a shame, too, since he was feeling better not long after — I called him at intermission — and the show was really very good.

The rest of the week — is it really Thursday already? How? — has passed by very busily at work. I do a little bit of writing every day, even if yesterday proved the exception, and I watch a large amount of The Good Wife on streaming video. (Cumming’s in that, too, as it happens, but playing a very different character.) A night out at the theater notwithstanding, I lead a rather boring life. So today took a hard left turn into suck.

For Christmas, Heather very generously and unexpectedly bought a gift card for Telecharge, which I decided to put towards a Broadway show. Specifically Waiting for Godot, starring Patrick Stewart and Ian McKellan, which is running between now and then and end of March and is supposed to be very good. I bought a ticket several weeks ago, and had decided upon tonight. I had my ticket in hand, was traveling light, and eager to see the play.

And then it snowed.

I knew the snow was coming since at least yesterday, but I thought it would start later than it did, and I hoped it wouldn’t be so bad. Then it just kept falling, and the wind picked up, and it got a little difficult and messy to walk outside our office, and then our announced that it was closing early, letting everyone go home if they wanted by 3:30. The MTA was recommending that people not stay in the city if they could help it; if you were traveling on the Long Island Railroad, you were encouraged to do so before the weather got worse and they started suspending service.

I didn’t much feel like getting stuck in Manhattan overnight, getting out of the play around…well, around now, actually, between 9 and 10 o’clock, only to discover that the trains home had stopped. Was I supposed to try and get an overpriced hotel room then? Find someplace open late at night to buy clothes so I’d at least have some clean underwear the next morning? I hated doing it, but I decided, better safe than sorry, and I headed home.

The commute wasn’t all that bad, hardly bad at all, actually. I’ve had better, but I’ve certainly had much worse. It’s still snowing, and they did suspend some service after 8 o’clock, reporting delays on the lines that are still running. But honestly, I don’t know if I made the right decision. I may never really know. It was a judgement call. I’m sorry it lost me the show — and much more the opportunity to make use of the thoughtful gift — but it seemed like the best bad decision to make at the time.

And I have actually seen Patrick Stewart on Broadway once before, so it’s not all bad. (I thought that show was kind of lousy, but I don’t think he or his co-star there were to blame.) There will be other shows and other opportunities and better decisions to be made.

It’s funny, any other day all of this wouldn’t have been so terrible. In fact, it would just be the fun story of how I got to leave work an hour early, which is pretty good, since my hands were starting to cramp up from typing up my conference notes all day. (Eight hours and ten sessions led to a lot of notes.)

I don’t know what the weather or commute will be like tomorrow. At my boss’ recommendation, we all took our computers home with us in case it’s too difficult to get in. Of course, I had to borrow a bag from her having left mine at home. I’d decided not to bring it with me today, because, see, I was going to the theater…

Oh well. Best laid plans and all that. It’s disappointing, but that’s okay.

Last night, I went to this:

It was part of Selected Shorts, one of three I’m attending in the next few months. The stories were quite entertaining, and Baldwin — who apparently almost didn’t make it, thanks to filming across town — was quite good, as were all the other performers/readers.

I got home around 11 o’clock, quite tired, and allowed myself to oversleep and catch a slightly later train this morning.

I was also still weirdly shaken, almost certainly more than I should have been, by a phone call that had gone exceptionally poorly earlier in the day. I’ve been trying to set up campus visits, this time closer to home than Maryland, and it’s been tough. One instructor agreed to talk over the phone with me yesterday…and then almost immediately asked that we terminate the call. “Yeah, I think I’m going to hang up,” he said. “I really don’t want to go through all the courses I teach.” Which, you know, fair enough, especially at this busy time of year. But that’s the only reason that I called, and what I hoped I’d made clear in my original e-mail. I want to know the courses you’re teaching and the books you’re using and the challenges you and your students face. I have no hard feelings toward this particular instructor, who e-mailed after to apologize, but I’m also not at all happy about how things went. Those phone calls are awkward enough without the other party being openly antagonistic or non-communicative. I’m a pretty shy person to begin with, so I just hope for someone who’s eager to talk about the hows and whys that they teach.

I didn’t lose any sleep over it, though. (I may have mentioned, I slept in a little.)

Today, was just a lot more work. I have another phone call lined up for tomorrow, although I’m hoping that will go a little better, based on the e-mails I’ve already exchanged. And then next week…provided I don’t actually have to go on jury duty*, I’ll actually meet a few instructors in person.

I could use a weekend, though, I really could.

* Yeah, I forgot this summons was for next week. It’s a telephone standby one, which means I might not actually have to show up, but I won’t know until the night before, for about a week, starting Sunday. When I first responded to the summons, and filled out the form, I didn’t realize that now would be the single worst time ever for me to be on jury duty.

I was woken up this morning, a little before 8 o’clock, by a Verizon technician. (And a barking dog, who was not amused by the ringing front doorbell.) This was a different guy than on Tuesday, and he wasn’t here very long, just long enough to make a this-is-not-at-all-a-sales-pitch-but-obviously-it-is for FIOS, and then to poke around in the backyard and make the repairs when I told him we weren’t interested. (And we’re not. We already pay for cable and internet, and it’s questionable whether FIOS would even work properly in our area. I suspect Verizon only offers it because it’s much cheaper — for them — than repairing the existing copper lines.) What he did today is apparently not a permanent fix — big surprise there — but we do at the very least finally have a dial tone again.

I spent most of the rest of the day replying to Kaleidotrope submissions. Anyone who suggests that editors take some kind of delight from sending rejection letters obviously hasn’t spent the afternoon sending out close too one hundred of them. I’m now reasonably caught up with the submissions from January, aside from a few acceptances, but I’m starting to field queries from people inquiring after their stories and poems. The sooner I can dive into February and March, the better.

While I drafted rejection letters, I watched several episodes of the old Twilight Zone. It’s nothing short of amazing how well some of the episodes still hold up, despite having long entered the realm of pop culture cliche and parody.

And I watched Into the Woods, a performance by the original Broadway cast. My boss and I saw a poster for a local production on our trip to Connecticut this past week, and she made it sound really incredibly interesting. And it is, genuinely great theater, by turns darkly disturbing and laugh-out-loud funny.

And that was, whadyacallit it, Saturday.

I went into Manhattan last night, with my parents, sister, and my sister’s husband, for dinner and a Broadway show. We saw Nice Work If You Can Get It, starring Matthew Broderick, which is still in previews. It was pleasant enough, good fun if not particularly memorable, and if Broderick himself was maybe a little stiff — my sister thought he was “clunky,” which I think is a little unfair, if not completely inaccurate — the show was entertaining. It’s a jukebox musical of Gershwin tunes, some of them awkwardly shoehorned into a silly, paper-thin story — and not all them, I’d wager, either of the Gershwins’ best — but most of the cast (including, for the most part, Broderick) is game, and I think we all had a good time.

Of course, when we arrived in the city, we discovered that the restaurant where we’d had our reservation was closed for the holiday weekend. There was a sign on the door, apologizing for the inconvenience and redirecting us to one of their other restaurants around the corner, but it was still something of a shock. We’d discover today that they’d sent an e-mail (complete with a 30%-off coupon) to apologize and let us know, but in the end it worked out okay. I still prefer the first restaurant to the second, but we had a nice meal nonetheless. (I had roasted duck breast to start — creamy lentils, duck confit, sherry caramel — and then suckling pig — with bacon onion marmalade and toasted almonds. Although the goat cheesecake with sherry poached pears for dessert was probably the best part of my dinner.)

Anyway, that was yesterday. We got home late, after midnight, so I didn’t post anything here about it. Today, we didn’t do much of anything. I did the crossword puzzle, watched Community, went with my sister and her husband to buy Easter plants for my mother, and probably ate a little too much candy. No writing group again this week, because of the Easter holiday, but hopefully we’ll start meeting up again next week.

In the meantime, I still have a lot of Kaleidotrope submissions to get through. I’m starting to get queries — rightly so — asking about submissions I may not have even had a chance to read yet. It’s not quite at the point where I’m seriously thinking about hiring on a slush reader — what guidelines would I give them? — but it is a little overwhelming.

At least I’m temporarily closed to submissions, so I can get something of a reprieve. Meanwhile, the latest issue is still there for your reading pleasure… Just saying.

Happy Easter! (Or Passover, or Sunday, or whatever.)